(Toronto, Ont.) – The roster of athletes for the 2014 Canada Basketball men’s national team has been announced.Head coach Jay Triano and his staff are preparing the team for 11 exhibition games in Europe from July 24 to August 12.“We are fortunate to have a talented pool of athletes to work with. We have depth in each position and are able to field a strong team with a mix of NBA players, veterans of the international game, and university players,” said Steve Nash, General Manager of the Canada Basketball men’s national team.Jay Triano said, “We need to give these athletes international experience together as a team. We are going to be playing 11 games, six of those teams on their home soil. It’s going to be a hostile environment and that is a great way to learn.”“We need to go over to Europe and we need to see what the international game is, get experience playing for me and playing the international game,” he added.The team departs for Europe following the Tuesday July 22 morning practice.
ON POINT’S DREW EBANKS on Sportsnet Fan 590 with Roger Lajoie talking Canada’s Sr. Men’s Team:

For media accreditation, please download and fill out this form. 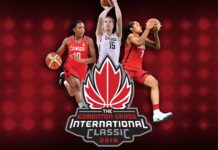 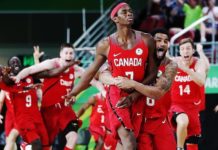