Canada will compete in the U18 FIBA Americas Championship

“We have a tough task ahead of us, but I believe in the strength, ability and commitment of the group that we have assembled,” said Rana. “With the majority of this year’s athletes being new to the international game, our focus is on development with the goal of qualifying for Greece.”

Rana,  a native of Toronto, Ont., will serve as the team’s bench boss for the third  consecutive season. He will be joined by assistant coaches  Scott Morrison (Lakehead University) and Kirby Schepp (University of Manitoba).

Canada Basketball’s assistant general manager and executive vice-president of the Senior Men’s Program, Rowan Barrett, echoed the coach’s sentiments. “These athletes have shown tremendous skill for their respective teams and in the past with the National Team program. We’re very excited that they are taking the next step in their development.”

The team will depart for five-day competition on June 16th. For more information on the 2014 U18 FIBA Americas, please visit:http://www.fibaamericas.com/

CIS Men’s Final 8 championship behind the scenes video series “In...

U17 Men’s National Team announced ahead of FIBA U17 Basketball World... 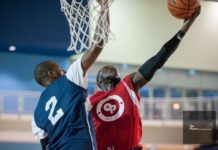