It was raucous atmosphere inside of Mattamy Athletic Centre on Saturday afternoon as an overflowing mass of Canadian hopefuls cheered on their team in their sparkling red jerseys in the men’s Pan Am championship game for gold medal rights – all for naught.

The Canadians were unable to emulate the same success that their lady peers had achieved last Monday, as an awfully skilled Brazil club shot the lights out en route to a convincing 86-71 win over Canada, winning them the gold and maintaining their undefeated record throughout the Pan Am basketball competition.

“We played against a very experienced and smart Brazil team that moves the ball and make you pay for your mistakes,” said general manager of Canada basketball operations, Steve Nash. “Those are invaluable lessons, you can’t learn those through a textbook. It was a great opportunity for our guys.”

To win a medal, let alone a gold medal, was unprecedented perhaps a few years ago. But with the new wave of talent emerging through the basketball ranks it’s only a matter of time before Canada makes its undeniable ascension to the top, and winning silver is one way to do that.

“We’re making progress, it’s exciting. I think it was a terrific week for a lot of our guys to gain experience,” said Nash. “The result was great as well, to beat the U.S. in the Pan Ams and make it to the gold medal game and to come out with the silver is an excellent result for us.”

“In the big picture, it’s great,” added Nash. “We’re moving in the right direction and guys are getting experience. In this tournament, for us to finish higher than we’ve ever finished, is fantastic.”

And although this may not have any direct bearing on the 2016 Olympic qualifiers next month in Mexico, it’s an experience that will bode well for the Senior Men’s National Team (SMNT), particularly for 18 year old Kitchener, Ont., native Jamal Murray – provided he makes the roster.

“It will help me a lot,” said Murray when asked how the Pan Am Games will benefit his game moving forward. “I got to know a lot of the guys on this team, [having] a lot of great coaches around me. I got a lot of experience playing internationally, it’s a more physical game with a lot of little tricks you’ve got to learn.”

Brazil was exceptional throughout this contest. Their ability to spread the floor was unparalleled, particularly their big men who converted on several backbreaking trifectas in the win.

“That was our ride. They were going to allow us back in the game by missing a couple of shots and they did just that. We didn’t take advantage of it and that’s on us,” added Murray.

Canada’s Andrew Nicholson, who finished with 11 points on the night, was in foul trouble for a large portion of this game. The 6’9” forward fouled out at the 7:53 mark of the third frame after picking up a technical foul.

Coach Jay Triano realized emotions were high going into the gold medal game, and the effects of those emotions reared its ugly head against a Brazilian team that took full advantage of it.

“We had a quick turn around, we were sluggish to start,” said Triano. “I don’t think we had the bounce that we had in other games.”

“I am [proud],” added Triano. “I’m too much of a competitor right now to feel good about anything. We don’t like losing a game like that but at the same time I think we’ll look back and reflect. We grew up throughout this tournament and we also grew up in this game a little bit. We got knocked on our heels but we didn’t quit, we came back and I thought the guys really played in the second half.”

Anthony Bennett led Canada with 18 points and nine rebounds in the loss, while Brazil had three players with 13 points – Augusto Lima, Larry Taylor and Rafael Hettsheimeir.

Dillon Brooks added 11 points in 16 minutes of action and showed a lot of potential going forward. He should have a breakout year at Oregon.

Brazil shot a blistering 53% from the field, while Canada shot an underwhelming 32%, including just 6-24 (25%) from three point range.

Brazil connected on nine of their 22 three point shots. 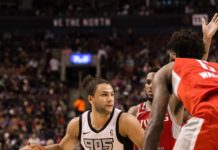 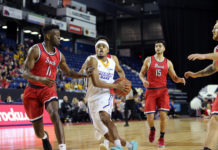