Andrew Wiggins walked up to the free throw line, drying his sweaty hands, he shot.

The NBA’s reigning Rookie of the Year’s puzzling attempt symbolized the sluggish start Canada found itself in, trailing Puerto Rico mid way through the second quarter in what may have been – to that point – their worst first half performance in Mexico City.

He, and his teammates, more than made up for it from there on out.

Wiggins led with 19 points and five other players reached double digits as Canada used a massive 38-9 run during the second and third quarters to defeat Puerto Rico 112-92 on Friday evening.

The first half saw a see-saw battle between the countries as Puerto Rico took a 7 point lead with just over three minutes to go before Canada stormed back on an 11-0 run, to put itself up 46-44 heading into the break.

Just a little over a week ago the Canadians managed to squeak by their Americas-rival 78-72 in the Tuto Marchand Continental Cup.

This time around there would be no dramatic finish however as the Canadians carried their surging momentum out of the halftime break and into the third quarter.

Nik Stauskas, who finished with 15 points, five rebounds and four assists, was one of the main culprits in the turn around as he connected on a couple of trey balls, seemingly reassuring Canadian fans that his regained shooting touch is here to stay.

While Cory Joseph was strapped to the bench due to foul trouble, CIS legend, Phil Scrubb, came in to run the show beautifully.

He tallied 12 points while controlling the pace and hitting teammates in rhythm during the offensive barrage.

The Canadians youthfulness and athletic advantage was evident throughout the game, particularly during the scoring binge.

Jay Triano’s squad put together repeated defensive stops, dominated the glass for the second straight game (51-36) and forced the Puerto Ricans into a myriad of foul trouble.

The red and white shot 23 free throw attempts in the first half alone and 44 for the entire game compared to Puerto Rico’s 25.

Jose Juan Barea did his part for his country as he notched 20 points, 7 rebounds, and 7 assists while Larry Ayuso came off the bench to contribute 18 points.

Canada will now move onto to the second group stage of the tournament.

Their next game will be on September 6 with the opponent and time to be determined. 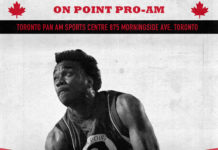 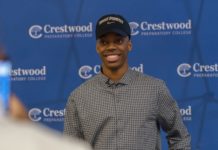 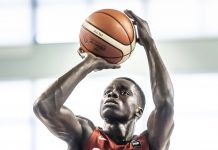