“That’s a tough game to play. After both teams going through emotional games last night, I’m not sure how much third place means. But at the same time, we have to play the game, and for where we are as a program, it was a great experience to play the team in their own country,” said Head Coach Jay Triano.

Cory Joseph was the star in the win, scoring 11 points with six rebounds, eight assists and one turnover. Joseph hit two jump shots in the final minute, including a buzzer-beater, to earn the third-place finish. Gustavo Ayon scored 16 points with 19 rebounds as Mexico fell in their final game at home. For full box score, click here.

The two teams got out to a sluggish start. Neither offence was clicking but Team Canada led 9-6 after six minutes of action. The Men’s National Team would find their transition offence and close out the quarterwith some easy baskets. After 10 minutes of play, Canada led 18-14.

The second quarter made up for the first’s lack of scoring. The two squads matched the scoring output of the first quarter only 5:30 into the frame. Andrew Nicholson’s inside-out game sparked a Canadian run to put the Men’s National Team up 36-28. Mexico clawed back and held a 41-40 advantage at the half.

Playing their final game of the summer, Canada’s offence lost its rhythm to begin the second half. Mexico found open shots and jumped out to a 54-47 advantage. Andrew Wiggins took it hard to the rack to draw a foul and Kelly Olynyk scored a putback to bring Canada within two. Mexico would close out the quarter with a run and led 64-60.

Nicholson started the quarter with a three-pointer as Canada looked to close out the tournament with a win. The shot would spark an 18-3 Canadian run and force Mexico to take a timeout. Mexico hit key shots to climb back into the game. After trading buckets, Mexico hit a three to take a 84-83 lead. Cory Joseph hit a jumper put Canada ahead 85-84, but Mexico nailed a lay-up to retake the lead. Tonight, Joseph would not be denied. He scored a jumper at the buzzer to secure the bronze medal, as Canada won 87-86.

“We battled it out with Mexico. Obviously, they are a great team. They picked it up after the first quarter, gained the lead on us. This tournament, we didn’t reach our goal that we wanted to reach but we’re leaving here with something so that’s a plus,” said Joseph, the team captain. “I feel like we took a step in the right direction as a group and will continue to build for next summer.” 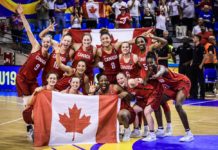