“We played very good D for 38 minutes and even though our offence struggled, our D gave us the lead,” said head coach Jay Triano. “To be successful in the future, we need to be sound on D like we were today.”

The next game for Canada is against Georgia on July 26. Canada will look to move to 2-1 on their European exhibition tour.

A full schedule of the tour can be found here: http://www.basketball.ca/full-european-schedule-for-canada-basketball-men-s-national-team-p156673 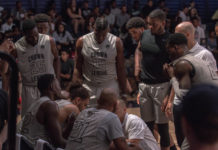