The Carleton Ravens announced Tuesday their 2015 Can-Am Shootout schedule — the latest in the university’s tradition of hosting top-level NCAA teams in the preseason.

With the loss of the Victor Raso and the Scrubb brothers to graduation, the Ravens will look to prove their mettle with the likes of Connor Wood leading the charge.

Valparaiso (2014-15: 28-6) is coming off its second Horizon League championships in three seasons, both of which earned them a spot in the NCAA tournament.

The resurgence of the Baylor (2014-15: 24-10) program has seen the Bears in the big tournament in five of the last seven years, and has had a particularly Canadian flavour in recent seasons, with alumnus like Brady Heslip and Kenny Cherry. Likewise, London native (and former York Lion) Dejan Kravic repped the Texas Tech Red Raiders (2014-15: 13-19) from 2011-14.

The Ravens have had a string of success against American foes in recent seasons, going 4-1 last year against NCAA teams — including wins over Vermont and Memphis, and a close loss to Indiana. 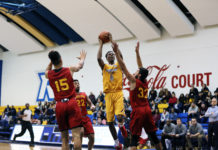