(Saint John, NB):  The Saint John Mill Rats are excited to report that Aquille Carr aka “The Crimestopper” is officially signed to play for the team for the 2014-15 National Basketball League of Canada season, pending FIBA clearance.  Carr is expected to arrive in Saint John on September 19th to begin preparing for the season.

Aquille will be at the Mill Rats booth at the 3rd Annual Touch A Truck fundraiser on September 20th from 10am-3pm at Long Wharf in Saint John.   Come on by to meet him in person and benefit a great cause (First Steps Housing Project).

Mill Rats fans and social media circles worldwide have been buzzing since rumors of the 5’5 20-year old guard joining the Mill Rats in the National Basketball League of Canada.

He also developed a considerable following his hometown of Baltimore, MD.  The Baltimore Sun characterized him as a “must-see phenomenon”.  His high school games were relocated to university arenas due to huge crowds turning out to see Carr.

He received numerous nicknames, the most notable being “The Crime Stopper”, for his alleged effect on thecity’s crime rate.  His high school coach, Harry Martin said, “The crime in East Baltimore probably goes down during our games.” Just one of his highlight videos on YouTube has received  over 6,000,0000 views to date.

CBS Sports called him “one of the most explosive scorers in the country“.  Sports Illustrated wrote, “He has explosive speed, electric ball-handling skills and court vision that could rival Steve Nash‘s.”

To watch a highlight film of Aquille Car please click below:

Season tickets are now on sale at the Harbour Station box office or by calling 506-657-1234.  The Mill Rats have introduced new tiered pricing by zone which makes Mill Rats games affordable to all Saint Johners.  If fans purchase 1,000 season tickets for the upcoming season by September 30th, then each adult fan will receive stock in the team as a bonus.  Certain terms and conditions apply and a written statement of details and exclusions about this program will be on our website. 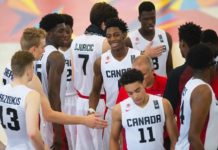