Head coach Carly Clarke spoke about the difficulties of the game.

“It’s nice to get the win today. I think it was a struggle as both teams were pretty tired but we battled hard and made the last shot. I thought their efforts were good for the most part. We made some adjustments that we had to make throughout the game and we adapted to their different style of play,” said Clarke.

Brewer had her finest performance of the tournament, but quickly gave credit to her teammates.

“I think this was our best team win today. Everything just came together. There were times we got out of our offense but we were able to pick something up out of it and create shot opportunities. I think we pulled through today on the things we have been working on the whole month we’ve been together,” Brewer said.

Canada has their final game of the tournament on July 6. They will play the winner of the France and Australia game, where the Cadette Women will vie for fifth place and the World Championships. 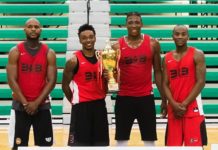