Sunday, February 1st marked the second day of Session 2 Junior & Senior girls divisions of the Canadian Youth Basketball League (CYBL) at Holy Trinity School in Richmond Hill, On. On day two of of Session 2 Canada Elite maintained their excellent play with a pair of wins to place them atop the Senior girls division at 7-0, while the buoyant and strong-willed Jayhawks finished with a leading 7-1 record in the competitive Junior girls division. No Limit Performance is also a squad to watch sitting at 7-1 so far in the Senior circuit. Motion Lady ballers are 6-2 after session 2 and look to make some noise in session 3 on Feb 21-22 at Waterdown District High School in Hamilton, Ontario. On Point is looking forward to seeing the action in session 3! Good luck to all participating teams.

The two day event – which looked to showcase some of the top young female talent in the province – allowed onlookers to get a feel for the growth and sheer talent that has burgeoned out of the this country over the past few years, particularly within the High School ranks.

As advertised, games were entertaining, competitive, and most of all, a testament to how far Canadian basketball has come and continues to grow the game of hoops.

After a tough loss against a talented and bigger-sized Canada Elite squad, Triple Threat (Dale) looked to turn the tide against a capable but inexperienced YAAACE team. Danielle Volt showed viewers her resiliency and overall vigor as she steered the ship for the ladies in yellow. Her balanced scoring output coupled with great perimeter defence against an unwavering YAAACE club proved to be the turning point in the two point win for Triple Threat. Chynel M was impressive in the loss for YAAACE. She was able to help counter several scoring runs made by Triple Threat with some of her own tough baskets both inside and on the perimeter. Chynel was all over the floor for YAAACE, seemingly connecting on contested three pointers, creating opportunities for her teammates on the break, and just simply playing tenacious, persistent defence.

No Limit Performance extended their winning record with a 20 point blowout win over the Flamborough Fire. Hallie Nickerson – quite possibly the top guard in the tournament save for a couple of highly touted players on Canada Elite – epitomized how to play fundamental basketball and pull out the win while doing it. Although Macleod was unstoppable in her pursuit of scoring the basketball, Nickerson’s ability to lead a team her team at such a tender age is almost unparalleled. She has leader instincts and it was widely apparent during her many scoring and passing opportunities. Flamborough – although not the most talented team – is an extremely well-coached and fundamentally sound team. There was no “I” in team for the ladies in red, but there was one in Hallie – a force to be reckoned with.

In another close matinee against a team oriented Flamborough Fire squad who showed why they’re a force to be reckoned with, YAAACE found themselves on the short end of the stick as they were unable to close out the game in the final few minutes. Kathleen H. and company were able force a myriad of tough shots near the latter part of the game and subsequently help push the lead to four. In the end it was Flamborough’s ‘every person touches the ball’ mentality and overall unselfishness that allowed them to edge out YAAACE. Four players for the Fire scored eight or more points in the close win.

Live for Ball finished a perfect 2-0 on Day 2 of of the CYBL’s second session as they took care of business against Mississauga Basketball Academy. King continued with her stellar play as she chipped in with a healthy 13 point scoring output. Auric did her best to counter LFB’S continuous onslaught on the offensive end but LFB were determined to win by double digits – which they successfully did.

Educate, Train, Believe, Achieve maintained their ascendancy as one of the top teams in the Junior girls division with a seven point win over Live for Ball. What was expected to be a commanding win for a superior E.T.B.A squad turned into a heated battle between two competitive teams. English played her role in the win with a nice scoring output while Stephens did her best to counter the constant attack-mode mentality put on by E.T.B.A.

Definitely considered the most entertaining and competitive matchup at the CYBL tournament on Sunday, the Jay Hawks two point loss to the Motion Lady Ballers was a bit of a surprise – especially considering the fact that the Hawks were undefeated prior to the matinee. Instead of Wahid and Verma taking control on the scoring end, it was Ralladi who displayed excellence against a disciplined Hawks defence, especially in the first half where she poured in 13 of her 18 points.

After a tough journey for the Peel Elite Monstars – who came into Sunday morning with a 0-5 start of  the CYBL circuit – Purge and company were able to subdue the offensive onslaught by ETBA’s Britney English. The Monstars – behind a competent and well-knowledgeable head coach – were able to grind their way to a two point win, releasing them of their ‘winless team’ connotation.

Angiels Basketball were able to pull out an impressive comeback victory against LFB after being down 10 (24-14) at half. Behind a second half scoring surge from Gabayno and Cebuano, Angiels made it a mission to win the game in the final 18 minutes. In doing so, they helped ignite a 38-21 run in the second half which led to the eventual seven point win.

Special Thanks to Chris Skinner of the CYBL 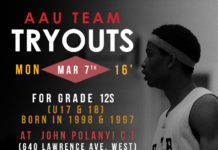 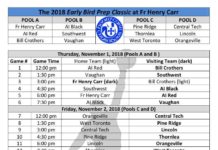