Canada Basketball has announced their Sr. Men’s team that will be participating in the 2015 Pan Am Games in Toronto, Ontario Canada.

On Point recently caught up with Oregon Ducks forward Dillon Brooks to discuss his thoughts about playing for Canada at the 2015 Pan Am Games. He shared his thoughts on what it means for him to play for his country at home and playing for the first time with the Sr. Men’s team. The rising star in Canadian basketball is coming off a tremendous freshman season at Oregon where he averaged 11.5 ppg and 4.9 rpg and 1.8 apg. He also led the Canadian U19 Jr. National team to a 5th place finish in the recent FIBA U19 World Championships where he led the team in scoring at 18.8 ppg(2nd in the tournament) to go with 5.2 rpg and 2.2 rpg. The 5th place finish was Canada’s highest ever in the competition’s history. Enjoy.

On Point wishes to thank Andrew Nicholson and his 44 Hoops Camp as well as Amir Morgan. 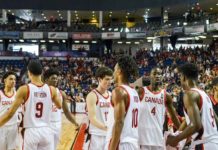 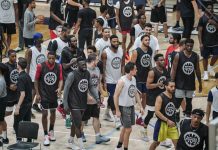 2014 Top Gun Tournament cancelled due to the passing of Shawn...