TORONTO, ON – Canada Basketball and its Board of Directors are pleased to announce the appointment of Michele O’Keefe as President & CEO.

“On behalf of the board, we are proud to announce Michele as the new President & CEO,” said John Mills, Chair, Board of Directors, Canada Basketball. “Michele has been an integral part of Canada Basketball for many years, leading the charge on national alignment and elevating Canada’s presence in the international scene. Through her roles on both the FIBA Americas and FIBA Central Boards, she has emerged as a fresh and passionate voice in the global game.”

“With her growing focus on the business operations of Canada Basketball since moving from leading basketball operations to the role of Executive Director in 2012, Michele demonstrated significant additional capacity,” added Wayne Parrish, past President & CEO. “We believe the organization is in excellent hands and we look forward to it continuing to prosper under her leadership.”

Parrish will continue his work with Canada Basketball, joining John Mills as co-chair of the Board of Directors.

“Canada Basketball has been incredibly fortunate to have Wayne Parrish lead our team since 2007, bringing his logic and business acumen to our basketball community when we needed it most,” said Mills. “Canada Basketball’s recent competitive and operational successes have their roots in the strategic foundation he put in place eight years ago. Wayne has been a mentor in preparing Michele and attracting other key leadership personnel to support his vision. The Board of Canada Basketball welcomes him to his new role and is pleased that Wayne will continue to serve the game.”

Hailing from Welland, Ontario, O’Keefe is one of the world’s policy-makers in the sport, as a member of the FIBA Central Board and the first Vice President of FIBA Americas.

“I’m thrilled to have the confidence of the Board of Directors of Canada Basketball. Basketball in Canada continues to shine both nationally and internationally,” said O’Keefe. “It is my honour to lead our strong team as we continue to elevate our domestic programming and prepare our talented athletes and coaches to represent us on the international stage.”

As the Executive Director for the past three years, O’Keefe was integral in securing the 2015 FIBA Americas Women’s Championship. She has been relentless in working to forge stronger relationships with provincial/territorial partners, national stakeholders and international federations.

O’Keefe’s transition from Executive Director to the new role is effective immediately. One of her first tasks will be recommending a management structure to capitalize on the rising popularity of the game and the competitiveness of Canada’s national teams.

O’Keefe began her professional career with the association in 1994. She has held a variety of positions in the NSF including Manager, Communications and Director of Basketball Operations. The Bishop’s graduate was the Executive Director of Ontario Basketball before returning to Canada Basketball in 2010. A full bio here.For more information, please contact:Bailey Williams
Manager, Communications
E-mail: [email protected]
Cell: 647-460-7976 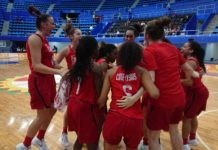