TSN’s new slate of basketball content is highlighted by Rio de Janeiro 2016 Olympic Games qualifying events – with the 2015 FIBA AMERICAS WOMEN’S CHAMPIONSHIP taking place in Edmonton this August – that will feature the strongest men’s and women’s basketball teams Canada has ever produced.

“This is an exciting partnership that speaks volumes to the rise of basketball in Canada,” said Michele O’Keefe, President & CEO, Canada Basketball. “We thank TSN for their support of the game, and providing Canadians the opportunity to tune-in and support our teams as they represent the country on the world stage.”

“With these new partnerships, fans can follow the most promising teams Canada Basketball has ever produced on their journeys to Rio 2016,” said Shawn Redmond, Vice-President of Programming and Marketing, TSN. “Adding these events to our lineup lets us serve Canadian basketball fans with more of the best events the basketball world has to offer.”

Coverage begins later this month with action from the 2015 FIBA U19 WORLD CHAMPIONSHIP in Heraklion, Greece. Ranked #3 worldwide, Team Canada heads into the tournament with five returning players from last year’s team, which netted a second-place finish that marked Canada’s best-ever performance. Additional events will be added to TSN’s broadcast schedule in the coming months.

TSN is Canada’s home of basketball, with a slate of basketball coverage that includes comprehensive coverage of the Toronto Raptors, the NBA Playoffs culminating with the NBA FINALS, complete coverage of NCAA MARCH MADNESS, and the BIOSTEEL ALL-CANADIAN BASKETBALL GAME. 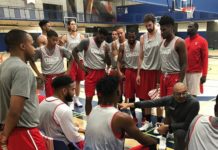