(TORONTO, ON) – Canada Basketball is pleased to announce the U19 Women’s National Team roster that will compete in the FIBA U19 Women’s World Championship.“This group is full of hard-working athletes who made the most of our training camp. We have come together and we are ready to test ourselves against some of the world’s best,” said Head Coach Rich Chambers (Terry Fox Secondary School).

Chambers is in his 12th and final year as head coach of the U18/U19 Women’s National Team. Joining him on the sidelines are assistant coaches Scott Edwards (University of Alberta) and Scott Reeves (Thompson Rivers University).

The U18/U19 Women’s National Team finished second at the 2014 U18 FIBA Americas championship, winning four games and losing in the gold medal game to the United States. This group also includes athletes from the 2014 U17 FIBA Women’s World Championship roster.

“We look forward to seeing these athletes build on their previous international experience and compete against the best in the world in their age-group ” said Denise Dignard, Director Women’s High Performance.

Athletes were identified throughout the year in a series of identification camps and recommendations from the Provincial/Territorial Service Organizations.  Canada is currently ranked 4th worldwide in the FIBA Women’s age-group rankings. 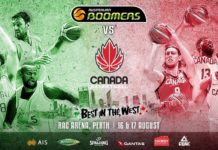