NEWMARKET – The York North Basketball Association (YNBA) will host the U11 Atom Boys Ontario Cup March 28-30, 2014 in high school gyms throughout the North part of York Region including Newmarket, Aurora, King City and other surrounding areas where Ontario’s top young talent will gather to compete at the highest level.

Last Fall, YNBA received a two-year, $94,000 grant from the Ontario Trillium Foundation to help it deliver long-term player development programs to youth across York Region, buy new equipment, hire an Event Coordinator and coordinate the U11 Championships in 2014 and 2015.

“We welcome the U11 Atom Boys Ontario Cup to our community and I want to express a special thanks to the York North Basketball Association for its leadership in making this tournament a reality for the athletes, their families and the community at large,” said Newmarket-Aurora MPP Frank Klees. “An event like this would be impossible without the tireless effort and dedication of the many volunteers whose efforts have been supported through the financial assistance of the Ontario Trillium Foundation grant.”

Ontario Cup tournaments feature boys’ and girls’ teams from Under 10 to Under 19 and are one of the largest basketball events in North America. Approximately 60 teams, 700 athletes, and 150 coaches, officials and delegates are expected at the U11 Boys’ Ontario Cup.

The Ontario Basketball Association (OBA) has awarded the 2014 and 2015 U11 Ontario Cups to the YNBA. Both will benefit the community; according to the OBA’s economic impact study with the Canadian Sport Tourism Alliance (CSTA), the U16 Boys Ontario Cup in Ottawa last spring generated $1.3 million in the city, and $1.9 million in the Province.

“YNBA is incredibly excited to take our turn at giving back to the basketball community by hosting 60 teams at the U11 Boys Ontario Cup Provincial Basketball Championships,” said YNBA President Jason Scott.

“We’re here to serve our guest families as they enjoy our local culinary opportunities and welcoming business community. Welcome to York North. We are glad you are here. Good luck, play hard, work together, respect everyone involved with our games, and have fun!”

A leading grantmaker in Canada, the Ontario Trillium Foundation strengthens the capacity of the voluntary sector through investments in community-based initiatives. An agency of the Government of Ontario, OTF builds healthy and vibrant communities: www.otf.ca

The YNBA is a premier basketball organization with deep rooted and proud history of being a leader in
providing community basketball to the North part of York Region for well over two decades. Founded by the Newmarket Basketball Club, York Region Avengers and East Gwillimbury Huskies the YNBA has most recently expanded to also include the Aurora Basketball League. For more details about the extensive basketball programs or information on how you can help with this year’s Ontario Cup you can visit YNBA at www.ynba.ca or contact them via email at [email protected] 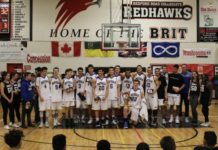