The 56th Annual St. Mike’s/Nike Invitational kicks off this Thursday January 7th at 10am and continues on

to Championship Final on Sunday January 10th at 4:15pm! It’s going to be an action-filled tournament

with some of the GTA’s top teams participating including Father Henry Carr, Vaughan, Pine Ridge, Campion,

scouts checking out the ‘next ones’. Team On Point will be there…will you? 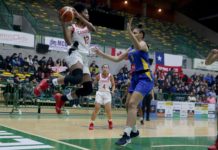