(TORONTO, ON) – Canada Basketball Women’s High Performance is pleased to announce the two rosters that will represent the Development Women’s National Team this summer. One roster will play in an exhibition tournament in China from June 22-28 and another roster will compete in the FISU Games from July 5-13 in Gwanju, Korea.

“International experience is key for the growth of these athletes. This summer will give 15 athletes the opportunity to play the international game,” said Fabian McKenzie (Cape Breton University), Head Coach of the Development Women’s National Team. “It’s an honour to coach this group and I look forward to us competing on the international stage.”

Three athletes competing in exhibition games in China (Shay Colley, Jamie Weisner and Saicha Grant-Allen) will return to Canada to train with the Senior Women’s National Team ahead of the 2015 Pan Am Games.

Laura Dally, Michelle Hudyn and Abigail Fogg will join the team in Korea for the FISU Games.

Full rosters and coaching staff for both competitions can be found below.

*Will only attend exhibition in China
Follow @CanBball on Twitter for score updates and links for video or live stats. 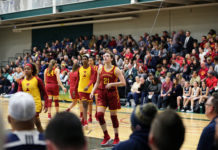