Wasatch was the most dominant team of the event…earning victories in all three of their games. Friday they took down Athlete Institute with Thon Maker, Sunday they collected a tough win over Thetford Academy. We feature their Saturday game against Orangeville Prep in which Utah State commit Koby McEwen dominated, scoring 25pts in the game. McEwen was named tournament MVP for his efforts.
Wasatch’s other Canadians performed nicely as well as Josip Vrankic, Emmanuel Akot and Jackson Rowe had solid efforts.
Orangeville Prep was led by the always solid Eugene Omoruyi and young stud Ignas Brazdeikis. 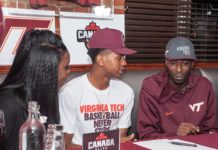