The summer of 2015 was a huge time for Canadian and Toronto basketball as several Pro Ams thrived and flourished in conjunction with the tremendous growth of basketball in this country.

The Nike Toronto Crown Elite Pro Am was no different.
4 weeks of intense basketball starting on July 3rd culminated in the Championship Game on July 24th in a stuffed to the gills Jarvis Collegiate that was hot and steamy and had that true old school basketball feel to it.

The Championship game pitted 1 Love TO vs. A.C.E. and 1 Love TO eventually edged out the 53-49 victory to win the first CROWN League championship.

The MVP was Dwayne Williams-Smith who played a stellar game and has been tearing it up all summer on the Pro-Am circuits.
BOTH games are highlighted in the video.

On Point Basketball was on hand to take in all 4 weeks and Flash Forward Multimedia was there to record and document all the action.
Enjoy the video!

On Point wishes to thank the Nike Crown League and the staff at Jarvis Collegiate. 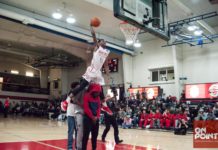