Jordan Wynter 6’0″ guard out of Lakeland College(Alberta) . Wynter is an unbelievably gifted athlete and is a two time Megacity Basketball Slam Dunk Champion. Not only a high jumper but also a very creative dunker. Wynter has also been featured on Worldstar Hip Hop. Check him out here in the teaser video as he shows some of his skills at Rim Level! 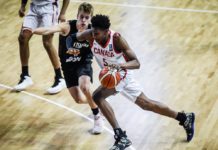